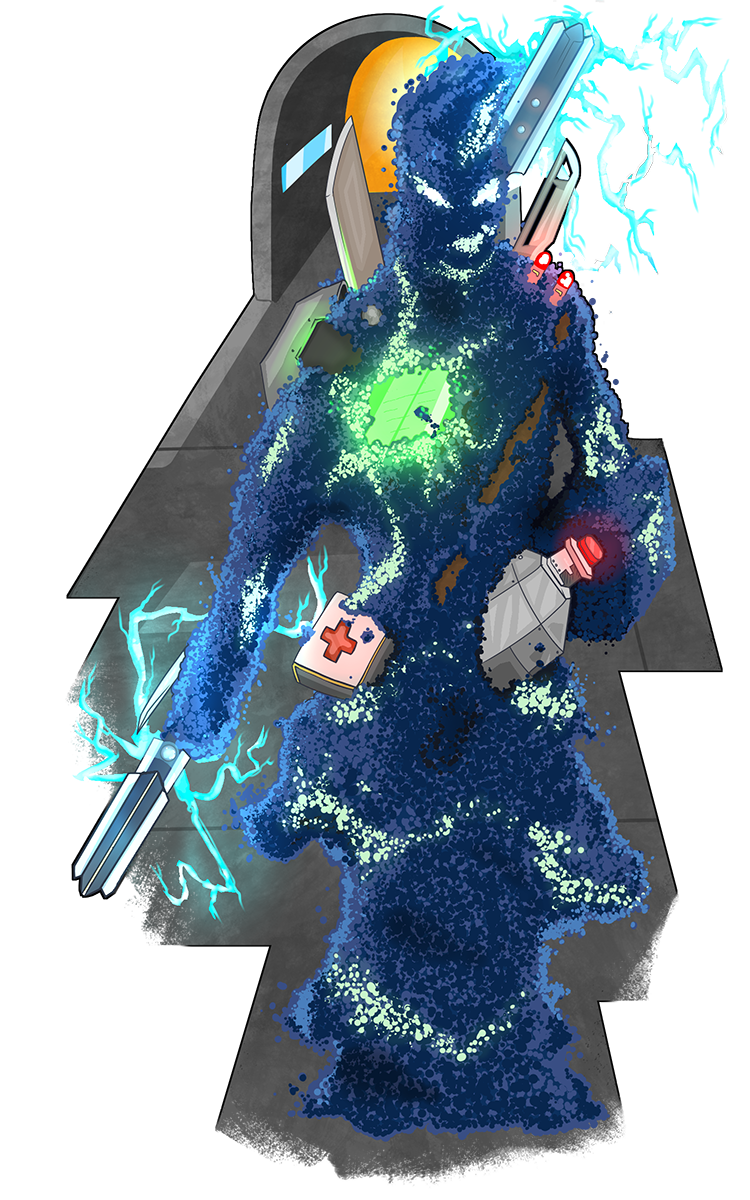 Each ror-nan hive consists of tiny, telepathically linked insects with a single, collective mind. A ror-nan hive moves and acts as one being.

Ror-nans are from Vamma, a planet lost to The Burn. Before their home disappeared, Vyla, their enormous queen, led and connected a shared mind called the Great Hive, which contained the knowledge of every ror-nan. With Vyla connecting them the ror-nan flourished, developing amazing technology and building a single enormous hive that dominated the planet.

As The Burn came for the ror-nans’ homeworld, ARC arrived and loaded some of the insects onto ships headed away from the universe’s edge. Despite the pleas of ARC scientists, Vyla refused to leave the majority of her Species in such a desperate hour, claiming that The Burn held only the unknown–not certain death.

When their homeworld fell to The Burn, the ror-nans saved by ARC experienced great turmoil; without Vyla their minds were scrambled with a flood of individual desires, fears, and thoughts. With the help of ARC therapists, ror-nans were able to bond together once again but this time in much smaller, separate hives with no clear leader. Try as they might, it seems a single hive of ror-nans cannot consist of more than 100,000 insects. Those who try to join or are born into the hive beyond this number find their mind cannot connect to the others, though they can join with another, smaller collective. The Great Hive was no more.

Each individual hive is scattered across the universe. Many of them search for a way to rejoin all ror-nan minds again. Some even believe a united ror-nan colony might have the mental power to stop or even reverse The Burn.

Each ror-nan hive acts as an individual entity, but those hives have much in common thanks to their shared memories of Vyla. Their tastes are shaped by that ancient connection; ror-nans admire and create art and architecture with spiral and spherical patterns, just as their queen did. Many hives spend their time in the pursuit of knowledge to better themselves and not just because these ideals were important to Vyla. The hives believe that with enough work, they might discover a secret that could allow them to produce a new queen and reconnect all of their kind in one great mind. Most ror-nans yearn to feel this massive intelligence again, and this goal drives their pursuit of the shrinking universe’s secrets.

Every ror-nan hive has their own idea as to how they might recreate the Great Hive. For example, one might search for answers in the ruins of Omniscients, another could believe The Order of Heroes can find Vyla on the other side of The Burn, and a third might think the answer lies in using Artificial Intelligence to create a new queen.

Ror-nans’ pursuit of knowledge makes them a curious Species that asks probing questions to the point of others finding them pestering or rude, though they mean no harm and try to compensate by over-sharing about themselves. Those who are able to get over the initial shock of a hive’s personality find the insects make loyal allies. Adventuring hives often see their companions as honorary members of the collective with some taking on a self-imposed parental role, nagging their companions to take care of and better themselves.

Individual ror-nans are blue, beetle-like, wingless insects, each about an inch long, and a complete hive of 100,000 insects weighs 30 pounds. A hive stays crowded together and can take any shape, though they often move in a large, rolling sphere or take on a humanoid form to move and manipulate objects used by other sapients. If the need arises, some hives can separate into separate groups, though they do not enjoy splitting for any sustained amount of time, for it leaves each group feeling mentally incomplete and can result in the death of members of the hive.

The ror-nan diet consists of minerals and ore. Some believe ror-nans should be shunned or exterminated for their need to consume such resources. In truth a ror-nan hive can devour a large amount of metal in a short amount of time, but they do not require much sustenance and normally eat only what they need.

Ror-nans are able to reproduce asexually and are genderless. A single insect lives about 10 years, but the hive has a single memory that lasts longer than any individual. A hive reproduces at the same rate its members die. If needed, the ror-nans can increase their rate of reproduction to bring their numbers up. They carry eggs in their thorax and give birth to fully developed, live young.

Ror-nan colonies typically have single name that consists of at least two syllables.

All ror-nan Characters gain the Swarm special ability for free.