Menu
Site Dark Mode Available Toggle dark mode under Account > Preferences. The blog and some compendiums will be updated soon.

Celebrate 10 Years With Us! D&D Chaos livestream! Plus: Get a $0 Kobold Press adventure and 40% off select Marketplace bundles.
Lost Mine of Phandelver Free for April Play the D&D adventure for free until April 30, 2022.
Updated Compendium Sharing Shared Compendiums are now accessible via the web Compendium.
Play Now
Join a Game
Marketplace

Subscribe
Site Dark Mode Available Toggle dark mode under Account > Preferences. The blog and some compendiums will be updated soon.

Celebrate 10 Years With Us! D&D Chaos livestream! Plus: Get a $0 Kobold Press adventure and 40% off select Marketplace bundles.
Lost Mine of Phandelver Free for April Play the D&D adventure for free until April 30, 2022.
Updated Compendium Sharing Shared Compendiums are now accessible via the web Compendium.

Searches must be at least 2 characters. *

Burn Bryte is an original science fantasy Tabletop Roleplaying Game optimized for and created by Roll20. The players build heroes who live in the ever-shrinking Olaxis Galaxy, which is consumed by an existence-end phenomenon called The Burn. As Olaxis’s creeping edge swallows entire solar Systems, refugees struggle to find homes and resources, and the Wealthy exploit the panic for profit, the player Characters dare to hope and fight for what’s right in the face of oblivion. You can make a difference. 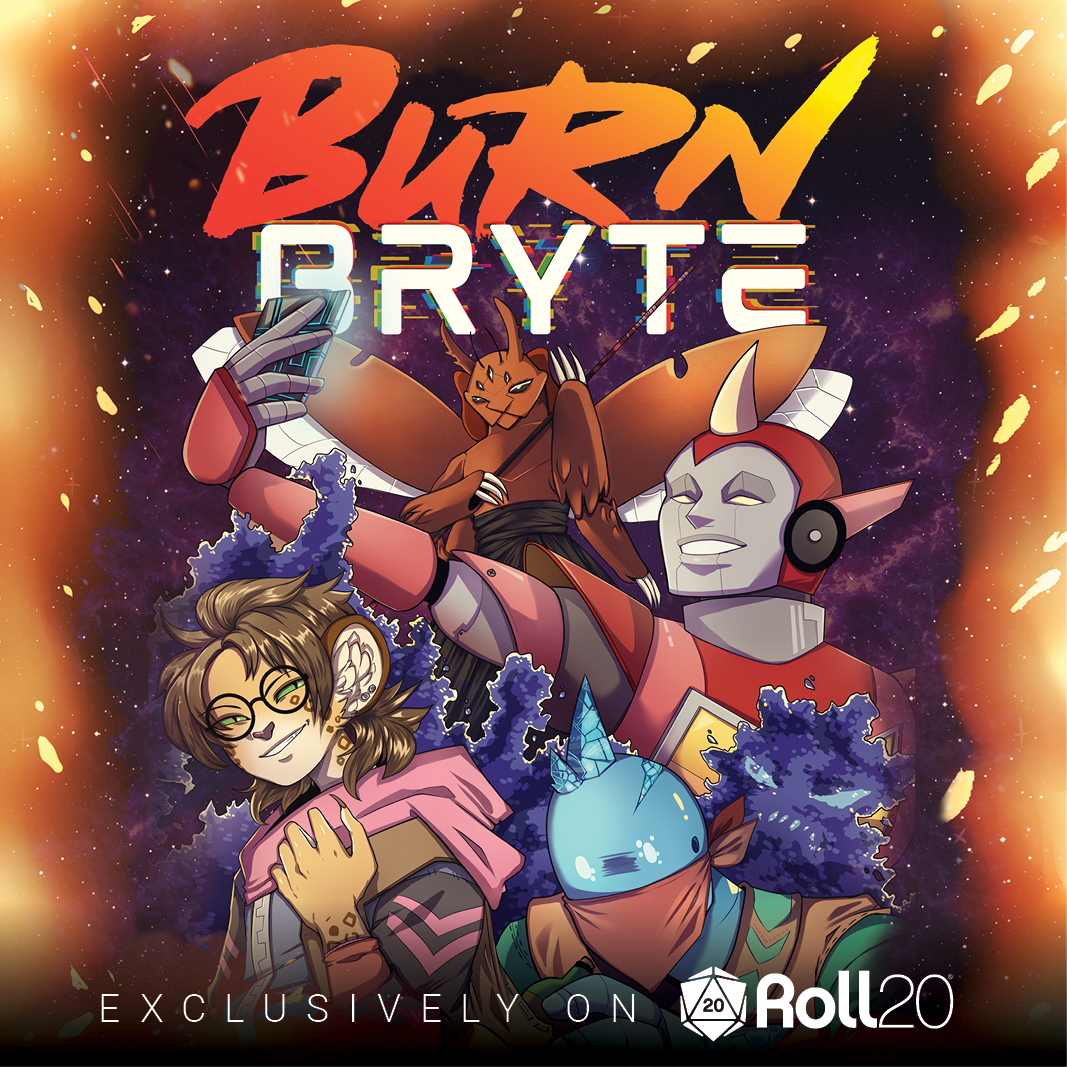 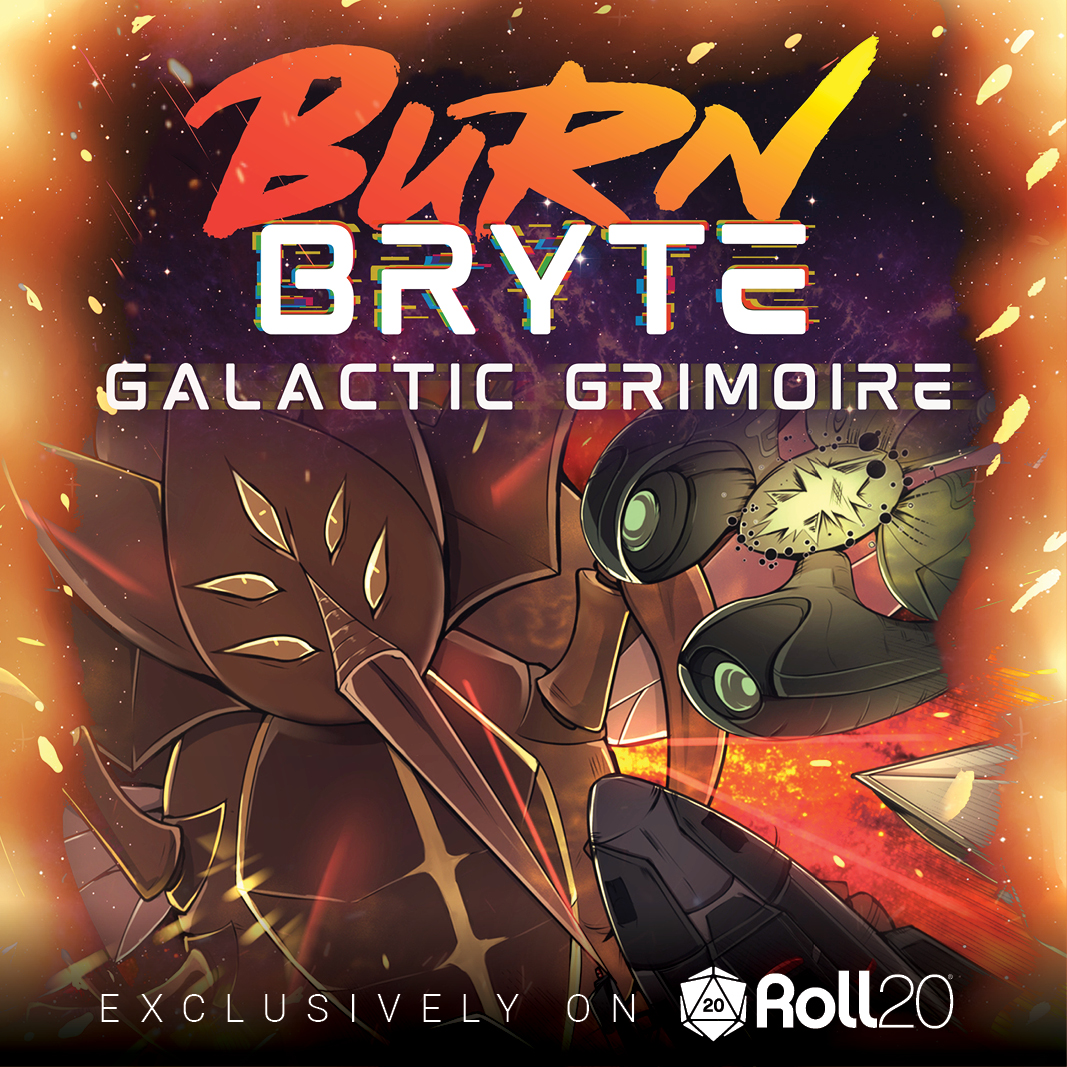 Welcome to the Olaxis Galaxy!

Burn Bryte was conceived in early 2016 when Nolan T. Jones, Roll20’s CEO, asked James Introcaso and Jim McClure to create a science fantasy RPG exclusively for the platform. Together, James and Jim came up with the idea of a galaxy in crisis, surrounded by a phenomenon that was shrinking existence, a slow reversal of the Big Bang. Roll20’s staff were excited by the idea, so Nolan took a chance and produced the game.

In the early days of Burn Bryte’s development two genius brains were brought on board: Kat Khul and Darcy Ross. Together the team hammered out the game’s major themes: immigration, refugees, Culture clash, and resource depletion were obvious from the start. Two others are escalation and pushing your luck. Every Combat encounter, exploration obstacle, and character interaction are filled with high stakes and a chance of failure guaranteed to make the game more interesting. We want players to push their characters’ fortunes to the brink, cheering as they pull off incredible feats and staring in anticipation as the GM describes the Consequences of their failures. The mechanics and story of Burn Bryte are made for desperate acts of heroism just crazy enough to work.

A less obvious theme we wanted to in our universe-ending RPG is hope. As the universe comes to an end, player Characters have an opportunity to make that shrinking galaxy a better place. We want their actions to mean something, despite the end of all things. Helping someone escape The Burn isn’t meaningless—that person is getting their whole life back. You have the opportunity to tell stories of triumph in the face of the most hopeless situation we could imagine. You won’t find a way to stop The Burn in this compendium, but that doesn’t mean there isn’t one.

The designers worked tirelessly with Roll20 staff, as well as countless artists, playtesters, and others to create Burn Bryte, but it is up to you as the players to tell the stories of The Olaxis Galaxy. We hope you have as many laughs, ideas, wow moments, and edge-of-your-seat anticipations playing the game as we did making it. To the amazing Roll20 community: This is for you.


Tools of the Trade