Spaceship Combat encounters occur when the player characters’ ship is attacked. Pirate factions, government militaries, monsters, and others patrol space for enemies and easy prey. When one of these forces finds the player Characters flying through space, spaceship Combat can occur.

When spaceship Combat occurs, the player Characters start by placing their character tokens inside the spaceship. The GM then places the enemy Spaceships and/or monsters in the zones around the player characters’ vessel. Once all tokens have been placed, the first Combat round begins.

The Order of Combat

The Combat phases work exactly the same as normal Combat when conducting spaceship Combat. The player characters’ MI reads the movements of enemies, giving them time to react to enemy ship movements and Attacks. A large part of the strategy is countering the opponents’ Attacks. When in spaceship Combat, conduct the following phases in this order. The completion of these phases represents a round of Combat.

During this first phase the GM declares the actions of enemies and enemy vessels just like normal Combat.

The player Characters move around the ship, taking actions and using the abilities of the ship to fight against their opponents. No single player is designated the pilot, the Gunner, or any other position. Instead the whole player character team can move about the ship from area to area to maximize their strategic position and resolve threats. Player Character Actions work the same as they do in normal Combat.

Below is a description of actions that player Characters can take while on a spaceship in addition to any normal action options the character has.

During situations that don’t require fine control of the ship, the MI can pilot the craft. When it comes to Combat (and other situations that require fine control like piloting through an asteroid field), the player Characters must control the ship to avoid the vessel taking damage. The ship map itself never moves and remains in the same position and orientation. Movement of the player characters’ ship is instead represented by moving the enemies around it. The reason for this is because the player characters’ ship has numerous tokens on it, making Movement of that vessel cumbersome and difficult.

Spaceship Movement occurs when a player character in an engine or cockpit area makes a successful skill roll to move the ship. There are no free Movement actions for the player characters’ ship. Player Characters can use ship Movement to avoid enemy Attacks and to line up the ship’s Weapons.

Player Characters can move the ship one of the following ways: rotate clockwise, rotate counterclockwise, move left, move right, move forward, or move backwards. These movements are represented by moving the enemy ships in the surrounding spaces to demonstrate how the player characters’ ship has moved.

Example: The players move their ship forward (in the direction of the fore zone). This affects ships in the following ways based on what zone they are in: 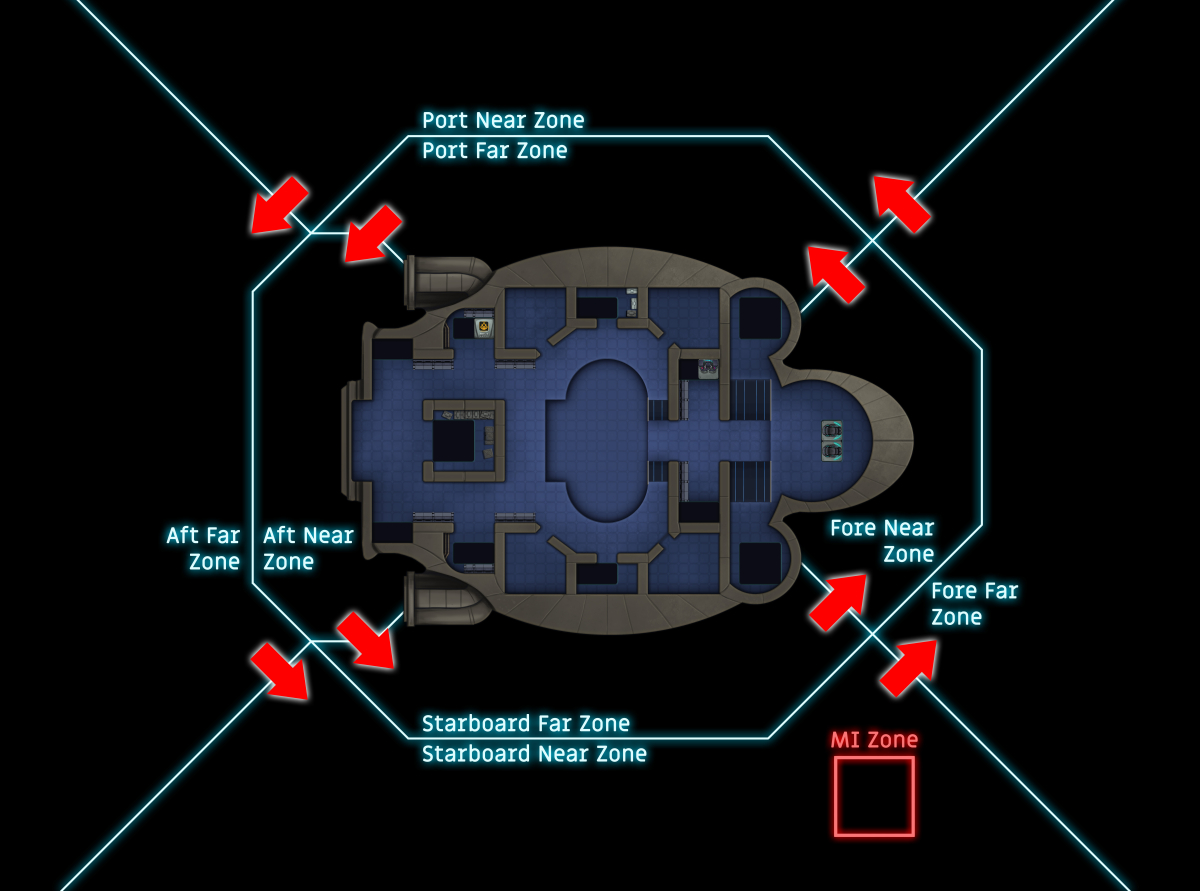 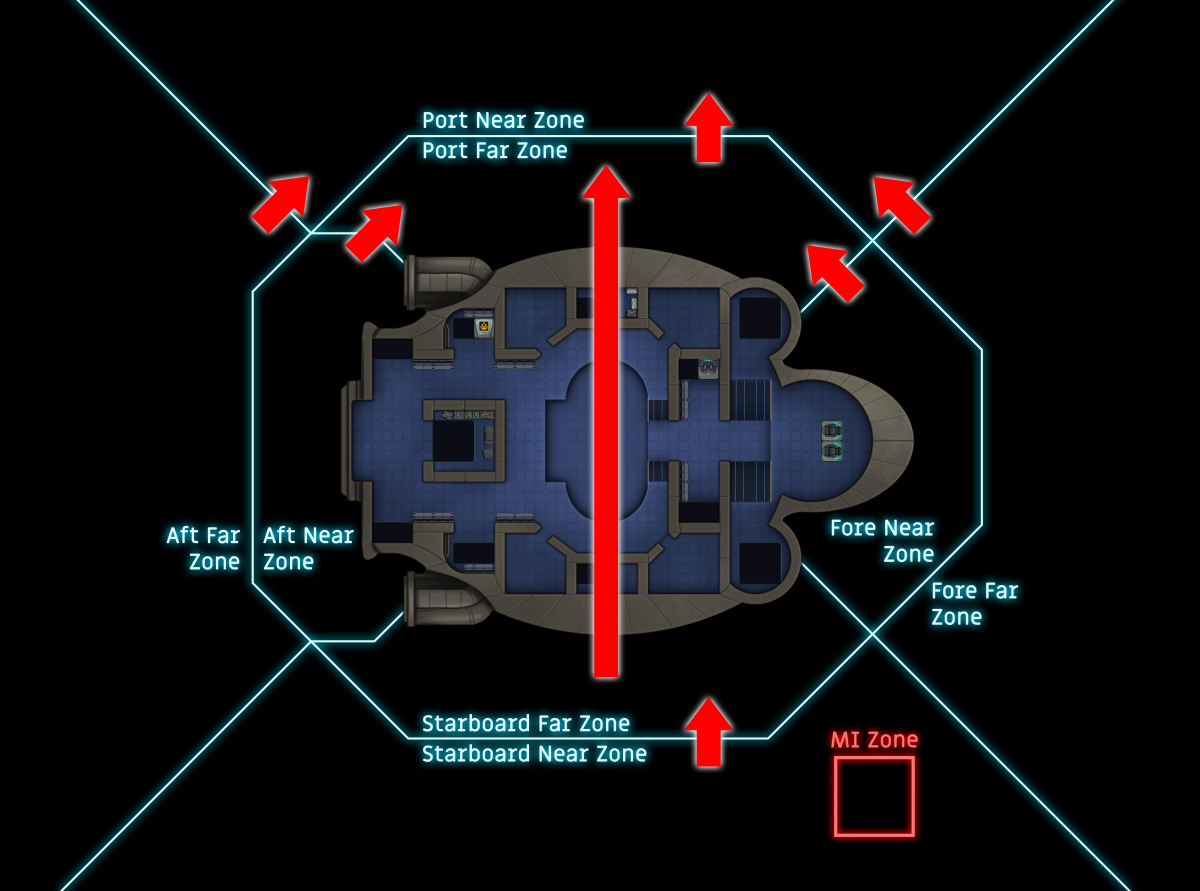 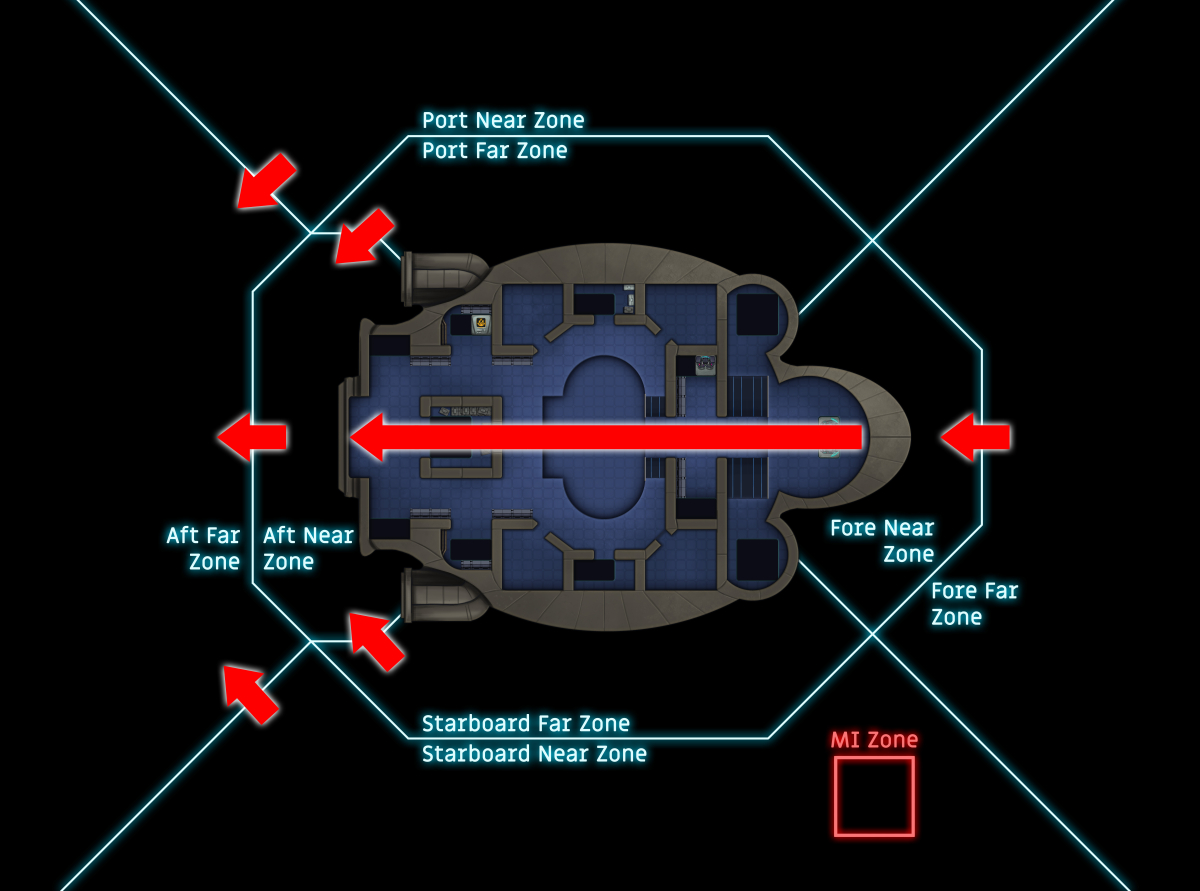 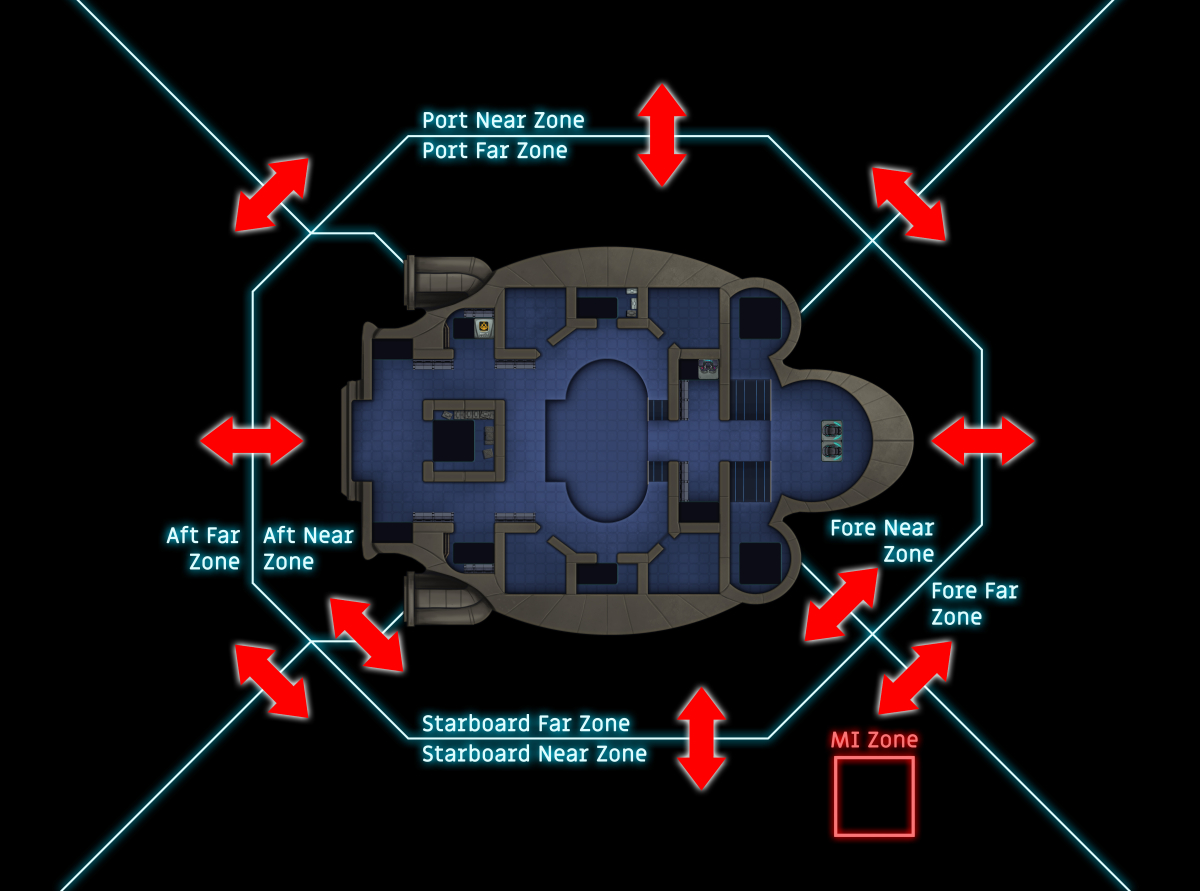 A player character in the cockpit area of the ship can make maneuvers to dodge incoming Attacks against the ship. Piloting Active Defense skill rolls work exactly the same as Active Defense skill rolls in normal Combat without ships except that they are used to dodge Attacks against the ship itself. These maneuvers do not normally move the spaceship in a way that would cause enemy vessels or monsters to change zones.

A player character can enter MI space through the use of the ship’s MI Jack. In order to enter or exit MI space, a character must be in a space with an MI Jack and use their free Movement or make a successful skill roll to jack into MI space (by sitting in a special chair with sensors that connect to the character’s body). Player Characters in MI space can only take actions there; their bodies cannot take actions inside the ship while they are jacked in. See “Magical Intelligence Space” above for more information.

Only one person can be inside a module at a time, unless stated otherwise in a module’s description. For example, a player character inside a turret could shoot with it multiple times on their turn, but if they end their turn inside the turret, no other creature can enter it to make Attacks (even if the turret occupies more than 1 square).

Seal or Unseal a Sector 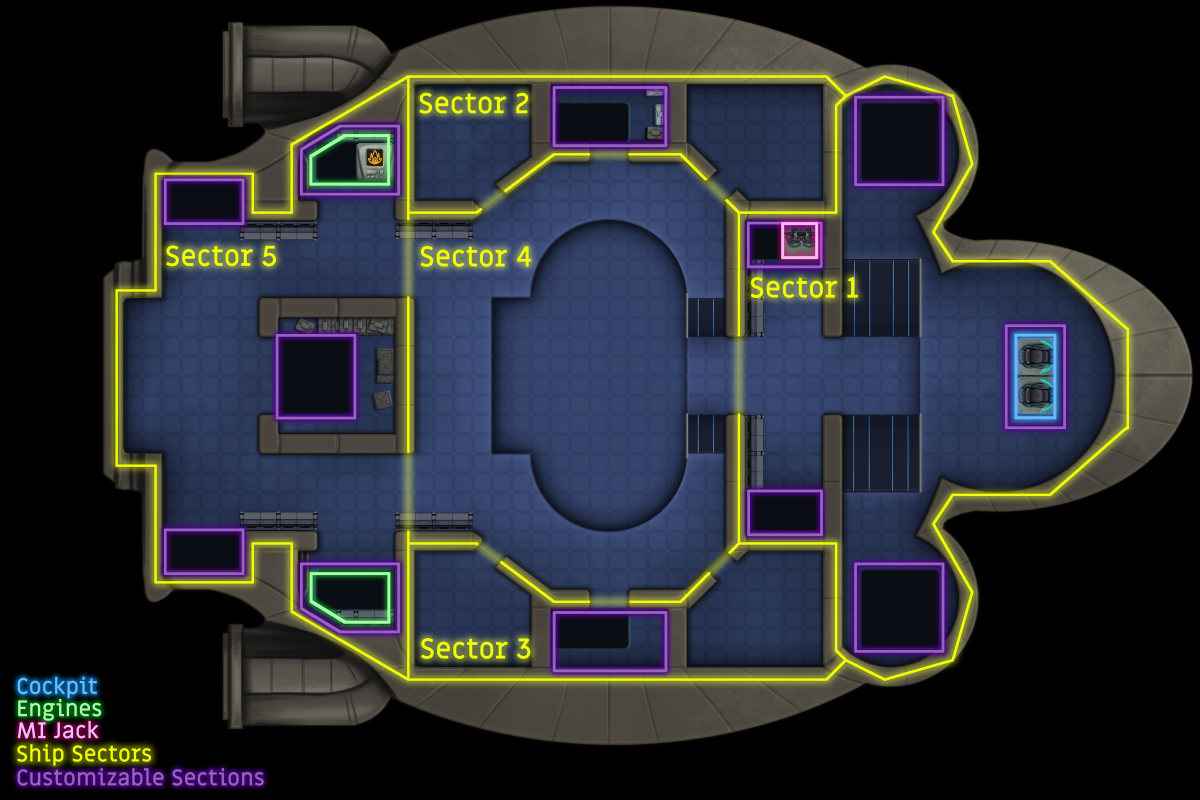 Fires on a ship are extremely dangerous and must be extinguished, or the ship could sustain critical damages. In order to extinguish a fire a player character must make a skill roll. If the skill roll succeeds, the fire is at least partially extinguished as explained in the “Fire” section below.

The Modules on a ship can be damaged by enemy Attacks and fire. A damaged module needs to be repaired before it can be used. If a player character is in a space with a damaged module, they can make a skill roll to repair it. Depending on how damaged the module is, it might take multiple skill rolls to repair.

It is possible for the player characters’ ship to be invaded by enemies. Player Characters can take actions to Combat these invaders per the normal Combat rules.

When enemy ships take a Movement action, they can move between any adjacent space zones that surround the ship. The adjacent zones outside the ship are as follows:

If an enemy ship has a speed greater than 1, it can move a number of zones equal to its speed as part of its Movement action.

Enemy Movement fully resolves during this phase of Combat.