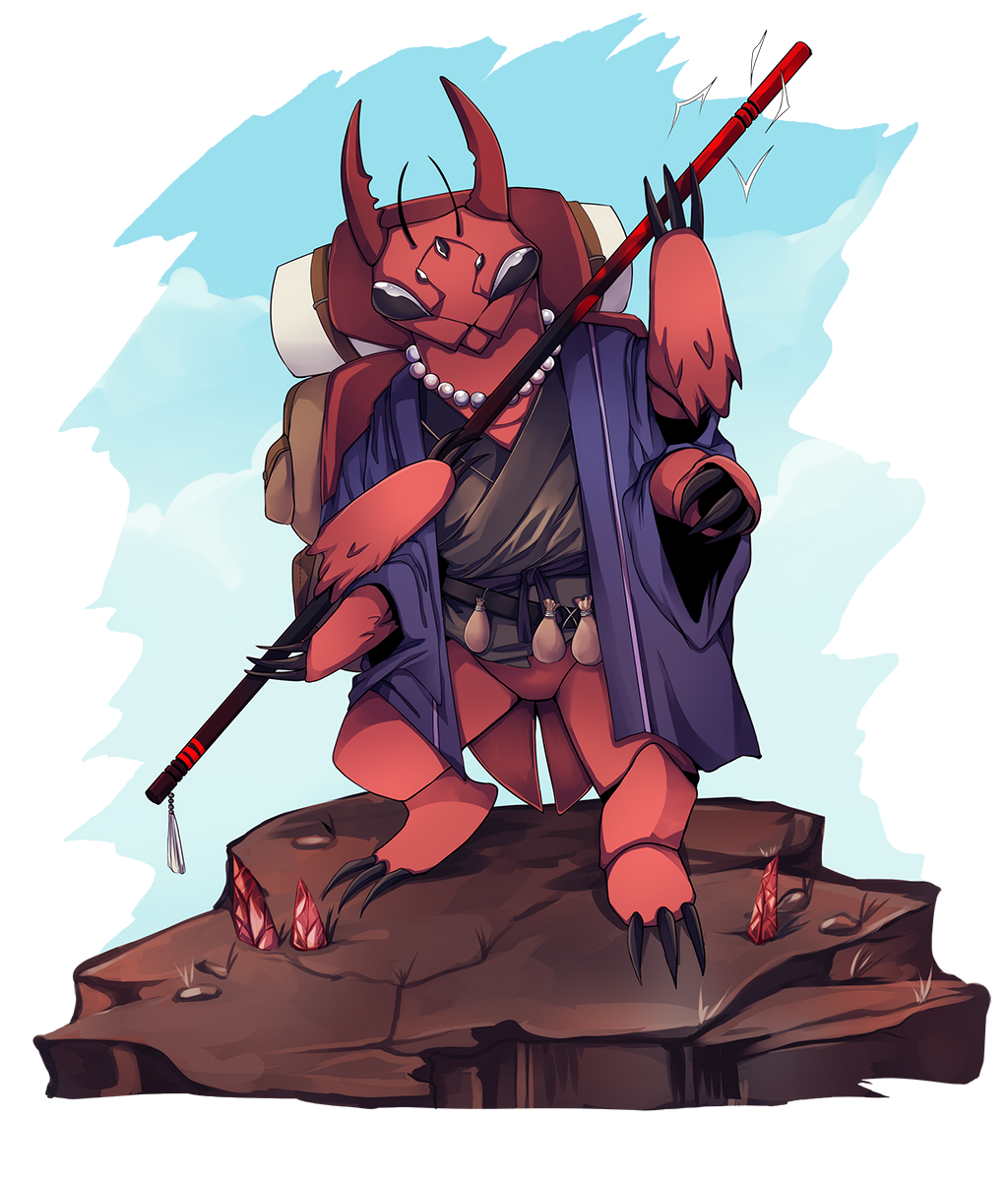 Kith’uks are insectoid warriors with friendly dispositions and a close-knit society.

Chitus, the original kith’uk homeworld, was in the outer-most reaches of the settled universe. The planet was cold and full of large beasts, leading the kith'uks to handle these elements by traveling together in large biomasses for warmth and hunting in packs to bring down larger prey.

Many kith’uks practice Nolo, a religion with three deities: Faza, goddess of the past, Allut, god of the present, and Talla, the mysterious deity of the future who sends visions to the Oracle, a fantastically long-lived kith’uk. Long before the Burn came the Oracle predicted the kith’uk homeworld would be destroyed. The species lived in terror of this moment until they learned to build spaceships from the ulrans. This new technology allowed them to colonize new worlds, but the celebration was short-lived when their ulran friends became foes and prevented the kith’uks from staying anywhere other than Chitus for long.

The kith’uks’ hunting habits made them great warriors. When their first true conflict with the ulrans began, the insectoids’ friendly natures earned them many allies. Throughout Olaxis kith’uks became known for their prowess in battle, and many nations hired small groups of the warriors as mercenaries, leading to the saying, “One kith’uk is a great friend, but a battalion is a terrible enemy.”

As the Oracle predicted, the Burn consumed Chitus soon after its arrival in Olaxis. Before the Burn took the planet and the Oracle the kith’uks turned to the ulrans, who refused to aid anyone, especially their longtime enemies. Ever since kith’uks have moved from planet to planet, trying to find a place that will accept them.

Kith'uks are primarily a peaceful species, but their demand for resources makes it difficult for them to share a planet. As the universe continues to shrink, kith'uks are forced to move in closer to other species, causing friction between them.

The foundation of kith'uk society is based on teamwork and camaraderie; most spend almost their entire lives living, sleeping, and working together in close quarters with other members of their species. As a coming of age ritual, kith'uks carve out two small notches in their back shell. These notches allow for their shells to interlock with others of their kind. Once interlocked an entire biomass of kith'uks can move together with the strongest of the group lending support to the weakest.

Despite their friendly nature kith'uks are often not welcome, and many societies fight to prevent a herd from migrating to their homes. The species requires a large amount of space to roam and an equally large amount of food. The ruts of their hunting trails cause damage to arable land, exacerbating food shortages. If unable to find a willing home and facing death from lack of resources, kith’uks could eventually set up settlements by force.

The life of a kith'uk is based around deep connections to family and friends, combined with trying to find a place in the universe that allows their kind to live in peace.

Kith'uks are large humanoid insects who stand between 7 and 9 feet tall. They have four legs and two arms and move by running upright. Their appendages and facial features are comprised of sharp edges from their jointed exoskeleton. Kith'uks have a large, protective oval shell on their backs that they can pull their limbs into, providing formidable protection. They reproduce sexually and give birth to live young.

Kith’uks generally have two names: a first name and a family name that is a combination of their parents’ family names. First names are usually short.