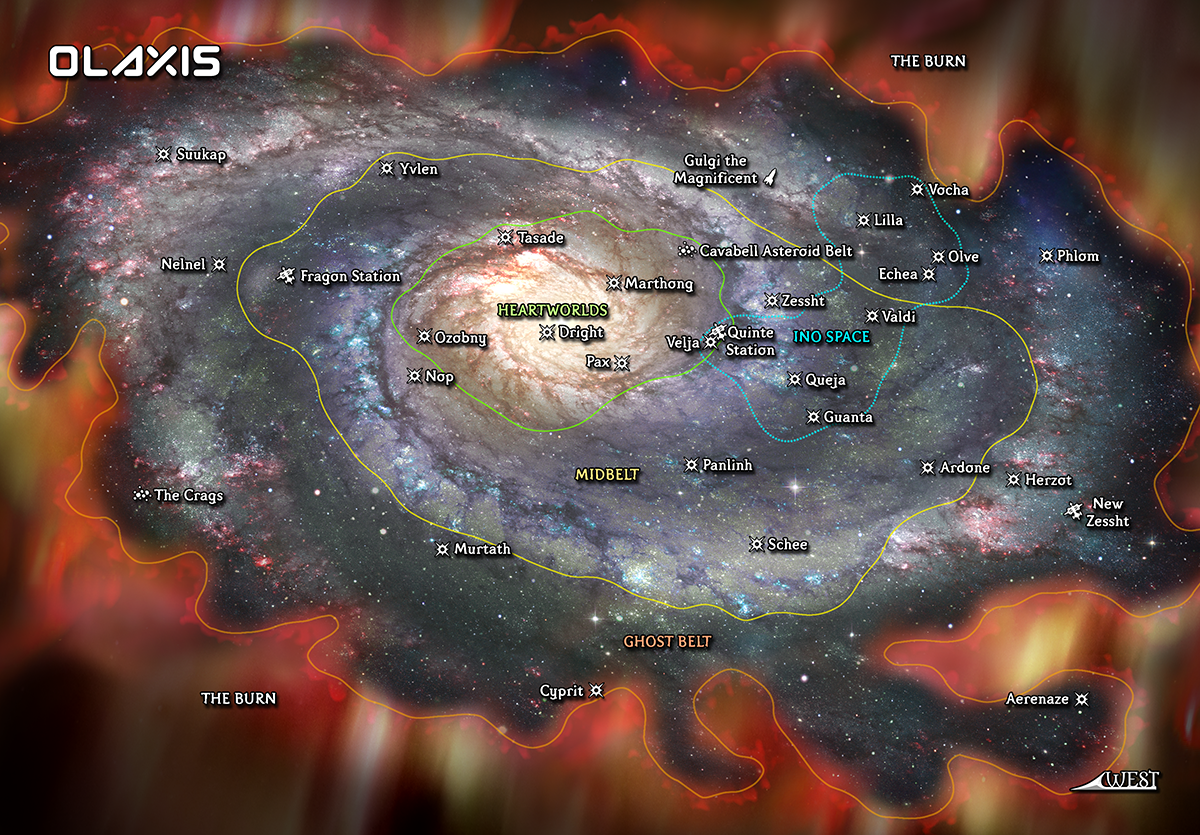 Olaxis is a galaxy on edge. Desperate planets fight for survival against an undeniable end, while adventurers make their living fighting against the universe itself. Yet in that struggle, many Olaxans find reasons to live and hope. Existence may be ending, but that doesn’t mean a good life isn’t worth the fight.

A Beginner's Guide to Olaxis

More detailed information about Olaxis is provided in the compendium, but if you’re eager to begin playing, The Basics are covered in this section. What follows is an overview that should be enough to get any player familiar with the world.

A Galaxy of Many Cultures

The sapient Species of Olaxis have long histories, and most have been expanding across the galaxy for centuries. While each is distinct and has its own home world, there are many places in Olaxis where no single group of sapients dominates. In these Systems different Species live, work, and love together, creating new cultures and governments from a variety of customs.

A century ago, a red and orange phenomenon, now dubbed The Burn, began to engulf the Olaxis Galaxy on all sides. Everything The Burn touches is consumed by it, and nothing that enters The Burn returns or is heard from again. It advances at an erratic pace and has already overtaken many worlds. As The Burn constricts the galaxy, panic increases as every being in Olaxis fights for increasingly scarce resources and a home as far from The Burn as possible. Corrupt Overguilds, wicked pirates, and nefarious politicians take advantage of the situation and use the disaster for their own gain.

A Galaxy of Magic

The technology of Olaxis relies primarily upon plasma, a magic fluid found below the surface of some of the galaxy’s terrestrial bodies. Plasma powers technology that makes convenient space Travel, instantaneous Language translation, the generation of force fields, and more possible. At its height Olaxis was a utopia of magical innovation and technological expansion. Even the most derelict and desperate locations in Olaxis have magic integrated into parts of their infrastructure, though not all have the resources to power it.

The Three Lobes of Olaxis

The galaxy is divided into three lobes. Nestled in Olaxis' center are the Heartworlds, where the Wealthy have centralized the dwindling resources to wrest control of the Systems furthest from The Burn. The Midbelt houses laborers and others who struggle to Survive. The Ghost Belt touches The Burn and is home to bizarre hazards, abandoned ruins, Unexplored Space, and unsubstantiated rumors.

The governments of Olaxis attempt to maintain rule of their peoples as panic and war erupt, but they’re not the only power players. Five Overguilds control transportation, communication, construction, medicine, and security forces in the galaxy. Meanwhile, Organizations of criminals, scientists, and heroes Travel Olaxis looking for profit, destruction, or worthy causes.

Displaced Peoples on the Move

As worlds disappear and The Burn creeps closer, sapients all over Olaxis flee their homes, looking for refuge closer to the center of the galaxy. As the number of habitable planets dwindles, more governments close their borders, leaving refugee Olaxans nowhere to go. They crowd failing Spaceships, inhospitable moons, and doomed planets looking for a place to live.

A Galaxy of Hope

Though The Burn is slowly wiping Olaxis from existence, many estimate that it will take hundreds of years before the galaxy is fully consumed. There are heroes in Olaxis, called adventurers, determined to help those in need, despite the fate of the universe. Some even dare to believe they might find a way to stop The Burn or reverse its effects.